There is a summary of my holiday reading. The marks out of ten are based on enjoyment and escapism rather than any splendid literary quality.

Jane Harper - The Lost Man (8/10)
I enjoyed The Dry, Jane Harper's first crime novel set in a remote part of Australia. This is her third, so I missed one. I read The Lost Man on the hottest driest day of the year so far in the UK. It is set in the Outback where near neighbours are a three hour drive away and everyone tells someone else when they are setting out solo to fix a fence. So how did Cameron Bright come to die alone without shade, shelter, his car, phone or water, miles from anywhere or anyone? 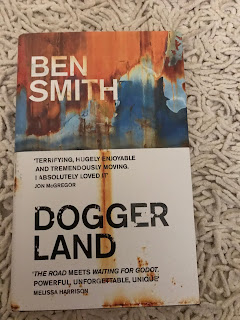 This story unpicks family feuds, local rivalries and complex relationships under the intense glare of the Sun. Did someone do something? What did they do? Who did it? A very satisfying page-turner. It'll make you thirsty for more.


Ben Smith - Doggerland (9/10)
To examine human behaviour, one tool an author has in their box is to remove almost all outside influences. Ben Smith achieves that by having two characters (Boy and Old Man although we are left to guess their ages) charged with the maintenance of an enormous wind farm. They are alone, reliant on the one other character, the deliverer of supplies. Why are they there? What dramatic event led to their dystopian existence? What happened to the boy's much-discussed father? This is a slow page-turner, beautifully sparse. Not unlike Magnus Mills. 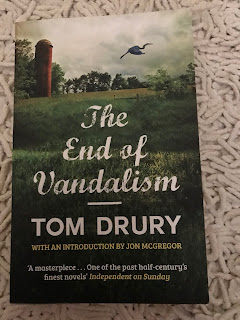 Tom Drury - The End of Vandalism (10/10)
Seventy-odd characters wander into this story of life in Grouse County. We are treated to a little of all their back-stories. Sometimes in detail; sometimes just a tease. 'She considered dog issues her speciality, and once, at a convention in Moline, had given a slide presentation on the history of the muzzle.' Do you have questions now? I do.

Before blotting his reputation somewhat, Garrison Keillor's Lake Wobegon was the place to go for this sort of thing. In a foreword introduction another of my literary heroes Jon McGregor suggests that anyone embarking upon this book will, inevitably, become an evangelist for Tom Drury. It is the case. 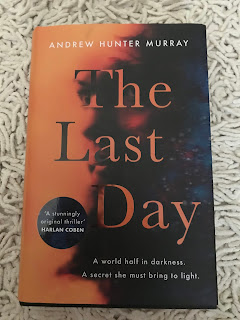 Andrew Hunter-Murray - The Last Day (8/10)
A second post-apocalyptic novel during a pandemic holiday. This one's conceit is that the Earth has slowly stopped rotating leaving half with permanent cold-dark-night, half with hot-light-day and a narrow band in the centre which is habitable. The author is that bloke from off the tele who takes supporting roles in The Mash Report, and is also a QI elf and a Private Eye journalist. This is his first novel. It's clever and gripping.


Neil Oliver - The Story of the British Isles in 100 Places (9/10)
I like to have a book like this close at hand. 100 short chapters explore Britain in roughly chronological order from 950,000 years BCE to the present day. I did history to A level. It was kind of forced upon me by being the only other timetable option if I wanted to do Geography and Statistics, which I did.

If this book had been available then I probably wouldn't have read it, because I wasn't that sort of kid. But read now, fifty years too late, it makes sense of how all those bits of the curriculum and primary school history stories fit together. I loved it.

It opens for debate if you would have picked the same one hundred places. I think I would have wanted to see Jarrow in there somewhere. At the same time as I was reading, the statue/slavery discussion rose up in the UK. It occurred to me, as I read up about Black Lives Matter, that the chapter on abolition is told from a white point of view and there are black martyrs missing from the story.

It has slightly more Scottish places than I would have expected but I came to see that Scotland has punched well above its weight in contribution to the history of the islands here. So that is not so much a criticism as an acknowledgement of my own ignorance.


Joel Dicker - The Baltimore Boys (9/10)
Moving about in time from the 1960s (briefly) to date, this story is of four childhood friends. Not all related to each other but who came to feel like family. Marcus Goldman, one of the four, is a writer and narrates the story from 2012. Dicker used this character to narrate his excellent, previous novel The Truth about the Harry Quebert Affair.

So for the bulk of the novel we know that there is going to be a tragedy (and there are minor tragedies and triumphs on the journey too) but not what it will be. We know from sentence 1 of a prologue that Woody, one of the four, was about to go to prison for five years, a month before the 'tragedy'.

It's a delightful book. Very easy to read and hard to put down.
Posted by Steve Tilley at 2:58 pm