In a fevered social media exchange last week (no, not literally) a friend suggested it would raise the morale of some people (approximately five I reckon) if I shared a Christmas-style family update every week. I apologise that it was a red rag to a load of bull so settle down for instalment one.

Should I die during the course of this current outbreak of plague then this may be awkward but awkward never stopped me before. Should someone you love die then this will probably seem a little insensitive but insensitive never, you know. Should you die then maybe it will be a relief to ponder, as you exit this current mortality, that I have failed to entertain you for the last time. 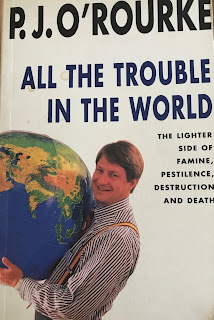 I take as my inspiration P.J.O'Rourke, the only US Republican who ever makes me laugh. His book All the Trouble in the World - the lighter side of famine, destruction, pestilence and death remains a benchmark of black humour. That said Donald Trump was a joke too far for him and he voted, with a peg on his nose, for Hilary Clinton. Read this book to appreciate what that involved.

The last week has been a little strange. Frankly if God had a bet on Manchester City for the Premiership then he's a bad loser. Also, if he's the know-all some of us think he is, then it's disappointing he forgot to tell us to buy Andrex shares.

Seven days ago I was worried that TCMT was travelling to Bath on the train every day. That said it is even more worrying that her work place has now closed and she is at home all day because:

1. My working day involves many periods during which, to the untrained eye, it looks if I am not working.

2. She talks to herself a lot and me sometimes but I tend to ignore it all.

TCMT: You'll miss me when I'm gone
Mr Sensitive: Nah, I'll turn on the radio in the other room and ignore that

3. Most frighteningly, she has a clear and strategic plan for how to spend the time well. I expect to be remerchandised shortly.

But, to the crux, We have all now been required to be socially isolated and physically distant. Welcome to my perfect world. I have always been terribly clumsy at physical greetings, precious about my personal space and happiest alone. Join me. Oh, you can't. So sad.

It has been interesting watching the clergy who were so dismissive of social media when I tried to introduce them to it now live-streaming themselves on Facebook. That said I have also gone up the techno learning curve fast enough to need to rope up first and the sentence 'We had a great Mothering Sunday family Zoom' would have made no sense in February.

People are watching this stuff with one eye on retweeting the cock-ups. Bear in mind, my friends, that the most-viewed video sermon from last weekend was the guy who set himself on fire with a candle. Exactly. Gospel 0 Conflagration 1.

We're not necessarily all going to die but it will be a close call and, based on my minimal knowledge of mathematics, the USA is completely stuffed. Why do the Germans have fewer fatalities from coronavirus than other countries with similar infection rates? Well my wild guess is that they read the instructions.