There was a history master at King Edward's School (KES) who took us at A level. He was called Charles Blount. Wore waistcoats. Bit of an upper crust accent. His teaching style was to lecture, with occasional pauses when he would question someone about something he had either covered before or reckoned should be part of the general knowledge of an Edwardian.

He went round the class in turn with his questions. Those of us who tended more to general ignorance than knowledge dreaded the moment our turn came. We could concentrate on little else as the geography of the enquiries reached our vicinity.

My first ever question in this context was 'What is anti-clericalism?' You may sense some deep prophetic undertone in this. You'd be right. Being poor at history but reasonable at vocabulary I took the phrase apart in my head and gave the answer 'A dislike of the clergy'. 'That's right' said Charles. I enjoyed the sense of relief that it would be a lesson or two before my turn came again and, furthermore, I had answered a question on a matter not yet covered. General knowledge demonstrated. Smugness.

Several weeks later, with no recollection of having answered a question correctly in the meantime and having achieved a mark of 5/20 for my first essay, there was a lesson in which the questions were getting nearer. If I was lucky I would be saved by the bell. I was not.

Then came my question. I couldn't believe my ears. 'What is anti-clericalism?' The very same, although this time it was a matter we had covered and I knew a bit more about it than could be achieved by parsing. Nevertheless I gave the same answer as it had worked before. I was shocked to hear 'No, it's more than just a dislike of the clergy, anyone else?'

Although I remained silent at such a brush off my inner monologue was raging. What is the point? Some of us are born to be wrong. I give up. I think I may have resolved that I would lose less face if I answered 'Don't know' to all further questions. Remarkably, history was my best A level and I enjoy reading history now.

There was an English master at KES called Tom Parry. He taught my class English, and history, at O level. Very Welsh. I got good grades in both subjects but he didn't seem to like me. Took every opportunity to belittle me in front of the class and was reluctant to admit I didn't need special measures. 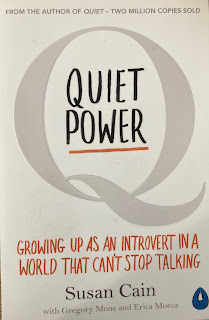 One day he asked us, out of the blue, what we were reading for pleasure. I used to read all the time at home and had always got a novel on the go but the terror of how my personal taste would be received by my friends made my mind go blank. I ended up mentioning a couple of Ian Fleming's James Bond books and was told most people grow out of those in primary school. The Parry plaudits were saved for one who had been reading Dostoevski. KES had that sort of 15 year old.

These stories came back to mind as I read Susan Cain's book 'Quiet Power'. It is a follow-up to her best-selling 'Quiet: The Power of Introverts in a World That Can't Stop Talking'.

Whilst not an extreme of the type I am introverted by personality. I didn't know that as a teenager although my parents observed I spent a lot of time alone and Mum thought it was odd. Dad didn't. He often took himself away to a quiet corner for a cigarette and a look at the newspaper.

Introverts find it hard to interact in class, are often listening when they don't look as if they are, and hate being jumped on with questions when they are unprepared. Susan Cain's follow up book is about people such as me, growing up. It is aimed at teenagers but has a chapter for parents and one for teachers too. I was the kid who needed time alone after school, or to visit a local, undemanding friend to play football or cricket in the garden, or a board game in winter. Thanks Steve. School was emotionally draining but I didn't know.

Susan Cain sees introversion as a super-power, thinking as desirable and quiet as normal. But if this quote represents you then, however late it is, you might find her two books helpful:

'Sometimes, by the time we think of the thing we truly want to say, the discussion is already over.'

Nobody is more surprised than me that I ended up with a career which involved much public-speaking. The secret, if it is a secret now I'm telling you, is this. We can do it if we're ready and prepared. I now challenge myself to do some talks unprepared without notes. It's still cheating because it is usually on a subject I've been discussing for over 40 years. Hardly unprepared. But straight after a new piece of input I won't know what I think and won't be able to discuss it. But I will be able to lead a discussion and, whilst listening to this, I will clarify my thoughts.