I love reading the question and answer interviews in Sunday supplements. Given how unlikely it is that anyone will ever want to publish my answers I thought I'd have a go at the question about 'influential reads'. I reckon all books influence me, even if it is to eliminate the author from my future enquiries. But what tomes really changed me? If we are honest they are rarely the books alleged to be 'improving'.

Here are ten. They may not be quite the top ten because I didn't want to overthink. I may do ten more later. The order, by the way, is the order in which I read them:

Aboard the Bulger
Ann Scott Moncrieff
1935
Not very old I was taken to Selly Oak library by my Dad. Here I was amazed. We didn't have many books in our house but Dad was always reading. So this is the secret. Borrow them and take them back. For nothing. Wow. This was the first book I borrowed. I read it wrapped in an eiderdown on my bedroom floor in front of an inadequate electric fire.
The Hitch Hikers Guide to the Galaxy (Increasingly improbable trilogy) 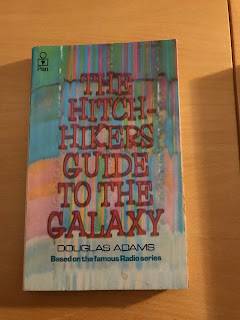 Douglas Adams
1979
Adams probably stands in a long line of great word-play authors but I had slowed my reading habit between the age of 12 and 18, perfectly undoctrinated by a school literature list which failed to move this adolescent teenage male at all. I read nothing but cheap thrillers from 1973-1979. Then this. Someone told me I should read it so I didn't because I am a recommender not a recomendee. Then I did. If writing can be like this, breaking the rules once you understand them, then it made me want to write. A few years later I had a go.
'The ships hung in the sky in much the same way that bricks don't.' One of my favourite lines of all time.
Zen and the Art of Motorcycle Maintenance
Robert M Pirsig
1974 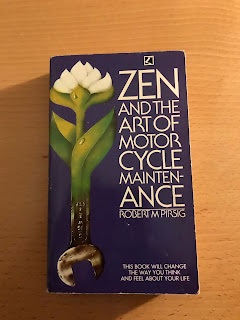 The Late Review used to be tagged on to the end of Newsnight but I saw some precursor of it around the time this book was published. I probably (aged 19 or 20) thought the discussion was a load of pretentious rot. I can't recall. It would have been late night midweek and once I started work I only ever stayed up midweek to watch the footie.
Anyway I found a copy in St John's College Library sometime around 1983/4 and, as an enquiring theological student, felt that it was rebellious to read something not on any lecturer's book list. Zen Christianity has accompanied me ever since and I swear that having a cool head in a crisis is something I decided to have rather than was born with.
I also learned that there is usually a good reason why some books get reviewed and others don't.
Illywhacker
Peter Carey
1985
College, despite my previous post, did get in the way of reading for pleasure. Then, in my first curacy in Nottingham, I met some lovely new friends who helped by lending some books they had enjoyed once I had announced at a dinner party that I was fed up with the quality of my reading. At the same time I started enjoying bookshops (libraries were going a bit downhill) and (yes, design does matter) the boxed-out Faber and Faber logo always caught my eye.
This epic narrative about coming-to-terms with what Australia actually is, narrated by a confidence trickster and liar, was a lucky find. It meant a lot that, despite Carey being a double-Booker winner and well-known, I had not heard of him before I bought this book and, having now read everything he has ever written and only found one book I didn't really enjoy, feel I discovered him for myself. I always recommend him, knowing that the reaction will be a bit Vegimity. 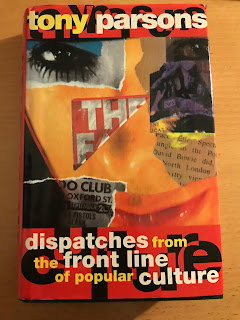 Dispatches from the Front Line of Popular Culture
Tony Parsons
1994
This sat on the shelf above my desk for many years when I worked in the late lamented youth department of the Christian home mission agency CPAS (Church Pastoral Aid Society). All the other staff bookshelves seemed to be full of things conservative evangelicals are supposed to read. All you imagine they ever learned was the result of a massive echo chamber. It seems to me that teaching people to live the gospel in contemporary society is pretty hopeless if you have no clue how contemporary society works, what it means and who the movers and shakers are. This set of columns, articles and essays from 1976-1994 was a priceless journeymate. What does it mean to be a Christian amongst this?
Passage to Juneau
Jonathan Raban
1999
Robert Runcie - The Reluctant Archbishop
Humphrey Carpenter
1996
The Case for God
Karen Armstrong
20009
These three books changed my attitude to genre. If all travel books were written like Jonathan Raban writes I would read them all. I would read about anything if Jonathan Raban held my hand. Even a yacht journey from Seattle to Juneau.
Likewise Carpenter taught me to read biography if the biographer can write and Karen Armstrong renewed my sense of enjoyment in theology
Unapologetic
Francis Spufford
2012 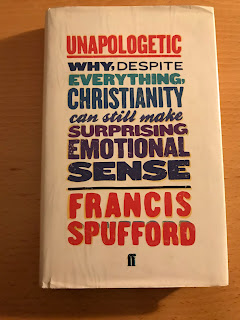 Some books help like a session of psychotherapy. You rarely know which one it will be. Spufford's sub-title is 'Why, despite everything, Christianity can still make surprising emotional sense'. As I read I found that he had written what I wanted to say. Christianity does give me a place of emotional safety from where I can explore the intellectual complexities of doing theology. If I had spent the first term at College reading this it would have saved a lot of time.
Thinking Fast and Slow
Daniel Kahneman
2011
Having read a book that explained to me who I am this was the book that helped me understand everybody else. What is going on when people make decisions? How do we choose? Why do we decide some weighty matters without all the necessary information?
Well, to use a technique that the book describes, I'll answer an easier question than those. Should you read this? Yes. In fact you should study it. 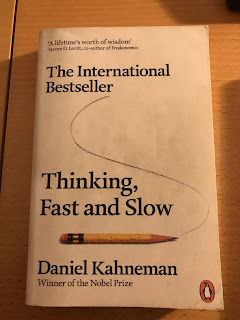 Well that was interesting Steve, particularly because only one have I read, therefore giving me plenty of opportunity to discover new/old books. Now, despite this not being a desert island, 9 have been washed away. Which one is left?